We don’t spend all our time sat behind computers coding away, we do that a lot, but we also take time out to have some fun. The Emerging Technology Services group in Hursley is full of budding rocket scientists, so when it came time to do a team building event, rocketeering seemed a good fit.

The group busily spent the previous week in their workshops, sheds or at the dining room tables constructing rockets. The rules were simple. They had to be self propelled and the only fuels allowed were baking soda, vinegar, air and water. Most people went for air and water rockets, but I went for a vinegar and baking soda powered device. The buzz created in the corridors was pretty impressive, even before we had arrived at launch day. 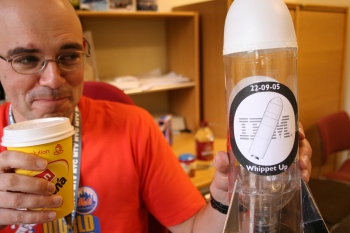 Thursday arrived and finally it was time to put our rocket science to the test. After a few beers and a barbecue there was a safety briefing and then we took turns to launch from a local pub (which has a very big field). Andy and Chris were the most successful rocket builders and had clearly spent a lot of time in research and development phases. Andy even managed to clear the field completely. 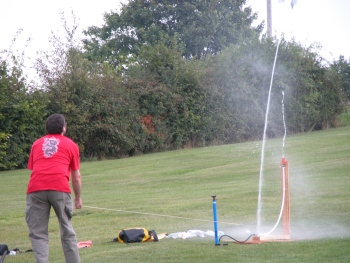 It definitely worked as a team building event. We had a good time, nobody got injured, I nearly became IBM’s first person in orbit, but apart from that it did help the team get closer together.