The Hursley site tends to have a few oddities, which differentiate it from other IBM locations. One of them is that we have a pub on the site (IBM sites are generally alcohol free). The Hursley Clubhouse also acts as the focal point for all the clubs and societies running in Hursley. It’s kind of like the corporate equivalent of a Student’s Union. They run a whole set of activities: football, sailing, flying, gaming, as well as some more esoteric ones, such as the model railway club. Visitors to the Clubhouse are often surprised to see a full model railway in operation. A lot of people, like me, use the Clubhouse more for its food and drink service. You’ll often see a few Hursley big wigs supping a pint on a late Summer Friday afternoon.

We’re also lucky that Hursley village, which is only a five minute walk from the IBM site, has two pubs of it’s own. The Kings Head and the one which I tend to go to more often, The Dolphin. The Dolphin is a very traditional, old English pub. It was built around 1540, reportedly from the remains of HMS Dolphin. We tend to go there when there’s a birthday, people join or leave and for any other special events. It’s nice to be able to walk there from our office and it tends to be packed with IBMers most lunch times. It is quite odd going somewhere that has been around for over 450 years when we spend all day working on stuff that hasn’t been released yet and probably only has a life expectancy of 5-10 years. It’d be interesting to know if any code we write today has a chance of still being run in 2460. Somehow, I doubt it. 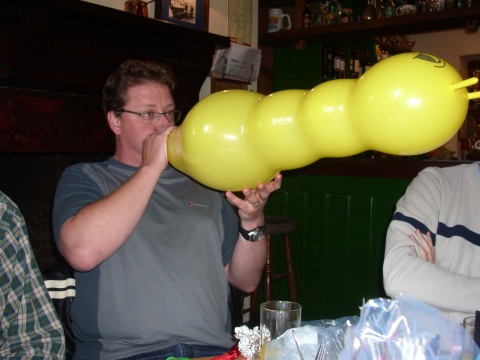 Here’s Ian celebrating a birthday in The Dolphin this week.