Here in the depths of Hursley’s D-Block we have a pervasive lab. The lab is used to show lots of cool bits of technology that’s normally carried, attached to, or embedded in people and sometimes even animals. The clever bit (and the thing that makes it different from lots of other pervasive technology labs) is that it’s all connected together via some of IBM’s middleware software. That means that new bits of kit can be integrated into the lab really quickly. It’s normally a matter of configuration rather than development.

The lab had been overflowing with toys and needed room to grow. So before Christmas, some new furniture arrived. This meant that a big tidy and a rebuilding of all the kit was in order. Mid-clean, the lab kind of looked a little messy, I hadn’t realised how much stuff was actually in there.

By the end though, it was starting to look pretty slick. We have some snazzy new signs and benches. All the kit will soon be up and running and I’ll try and write about some of the stuff we have in here. 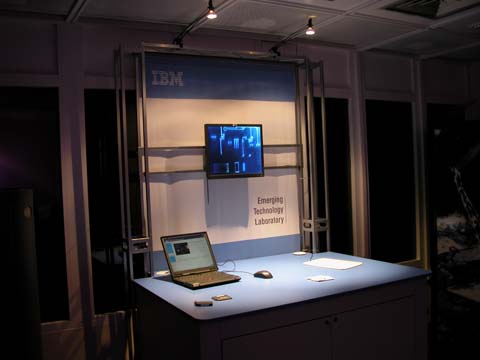