I’m not really in to Twitter and have been asked several times in the last couple of weeks to explain this dark ages behaviour. Sorting through some old patent disclosures, I found that I’d been part of a group that had tried to patent something that essentially was Twitter, in 2003, so it seemed appropriate that I should explain my inconsistencies.

In IBM we used a predecessor to Sametime 7.5, called ICT, for instant messaging. Like Sametime, it allowed you to set a status message with a limited number of characters. Most people left this as the default, “I am online”, “I am away”, but some of us would use it to describe what we were actually working on (this was before Blogs really took off).

We soon got a little bored with this (“I’m writing Java code” soon gets dull, no it was always dull), so we began to be a little more creative, setting our statuses to be little hidden messages that only a small group of people, or even just an individual would understand. It was completely unreliable. The chances of that person hovering over your name, on their buddy list, when you had a message for them was pretty small. That was part of the attraction, because if they did, it was a really nice feeling. It was the equivalent of catching someone’s eye in a meeting and knowing what each other are thinking.

The trouble was, the status messages weren’t persistent, once it had changed there was no way of going back in time. It seemed like a bit of a flaw, so we tried to patent a, “system for the persistence of sequential status messages” (hello Twitter!). It even had a nice little visual mockup included: 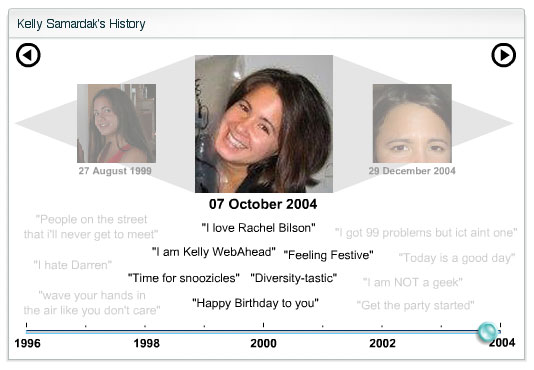 This is impressive, not for it’s similarity to Twitter, but for the fact that in the 5 years since, I’ve lost my hair and gained wrinkles, but Kelly looks exactly the same as she does now, i.e. 13. Anyway, the patent rightly got nowhere as there wasn’t anything technologically novel in it.

Over time we stopped setting these status messages, it was fun while it lasted, but I think we just got bored of it. I think this has started to happen for blogging and I think it will for Twitter too. They’re both here to stay, but not in the form they currently take. I think auto status generation will grow and inferences drawn from those will answer the question, “What am I doing now?”. I really don’t see people carrying on writing, “I’m playing cards with @youknowwho” for too much longer.

In the meantime, the thing that will really take off, will be email. 2009 will be the year when people start sending each other emails again, it’ll be like 1998 all over again and I can’t wait. Email is still my favourite form of electronic communication.

* I should also point out that I am wrong about everything like this, always and there is also the possibility that I just don’t get it.