Posted on behalf of Bharat Bedi…

The TEDGlobal Conference was an amazing week of learning, taking inspiration from and connecting with 700 of the world’s thinkers and doers. The speakers at TED gave excellent talks on subjects ranging from how humans might have evolved from aquatic apes to jumping from the edge of space. 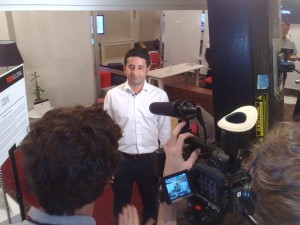 IBM’s smart planet vision fits in well with TED’s approach of ideas worth spreading and IBM sponsored the Innovation Lounge and the 25 TED fellows at the conference.
The fellows are an amazing group of world changing innovators from around the world.

IBM created two demonstrations for the TED and I had the opportunity to lead the effort around putting these demos together. The demos incorporate a number of technologies including Zigbee, messaging, ambient devices, mobile phone based remote control and monitoring, SMS, RFID, web & AJAX, current cost and home automation!

The first one of these was around using RFID technology to help facility interaction and conversations between the TED fellows and the other attendees at the TED Innovation Lounge . Each fellow was given an RFID tag that detected their presence in the lounge and displayed their profiles on 3 large screens. At the same time wireless ambient devices changed colour to highlight the presence of the fellows.

The second demo was about being smarter about our energy consumption and home automation. This was a good example of the smarter planet principles of an instrumented, interconnected and intelligent in action. We set up a home lounge environment with appliance such as lamps and fans whose electricity consumption was being monitored. These appliances could be remote controlled via SMS and a mobile phone application. The amount of energy being consumed by the appliance was conveyed in subtle ways again using an ambient device which changed colour.

Huge thanks to Dave Conway-Jones, Andy Stanford-Clark and Andrew Nowell for all their help with creating the demos.