As we all know by now, Second Life is less of a game and more of a virtual world with its own economy. Of course, inhabitants in a virtual world need virtual pastimes. A quick scan of today’s advertised events demonstrates that ‘Tringo’ and ‘Slingo’ are both more popular than ever. 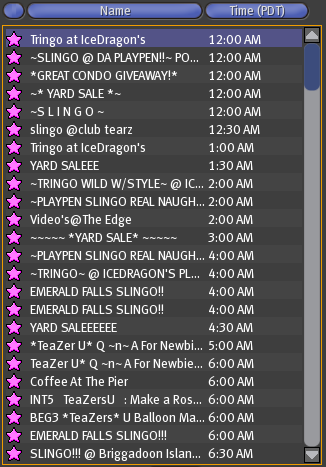 While Slingo (imagine a slot machine merged with bingo) has long been a popular game on the internet, Tringo seems to be more specific to Second Life.

So what is it? Well, earlier today, Wired reported on the background and popularity of Tringo, which is an unlikely cross-breed of bingo and tetris. I won’t try to cover it in detail here (perhaps because I’m busy playing it in another window? I’ll let you guess) but there are plenty of excellent coverage of the game out there already. If you don’t fancy trying it in Second Life, you can always play it on the publisher’s website instead.

There are plenty of other games in Second Life besides Tringo. In fact, Linden Labs hosts an annual contest to develop compelling in-game games. (2005 winners, 2006 winners).

It will take some time before any of them overtake the *ingo games for raw popularity in Second Life though. As a sign of its success, and another excellent example of a real world crossover, I notice that Tringo has become a GameBoy Advance title too.

4 thoughts on “Games within games: Tringo in Second Life”