I had a chance today to try the Second Life voice beta.

The demo requires a separate download, and only certain sims on the beta test grid are currently voice-enabled. I know that Spaceport Alpha and NMC and enabled. Apparently Abbotts, Lusk and Pulveria, are also voice-ready too. I’m sure the list will grow quickly.

When you speak a green wave form appears above your head. It fades to grey and vanishes when you stop, and goes red when you’re hurting other peoples ears. Here is Algernon complete with wave form…

And a bunch of people trying it out at Spaceport Alpha… 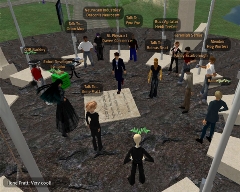 Some observations about voice chat:

This build also gives you the ability to “wear” an initial set of “speech gestures”. These speech gestures are randomly selected from nine different animations based on the intensity of your voice. These Gestures are currently located in your Library’s Gesture Folder (under “Speech Gestures”).

We will refine and add to the set of nine speech gestures in the next few builds.

I’ll be interested to see how this develops, and what other new features get added. I suspect that mute, which is currently not implemented, will be an important one.

I like it. I don’t think it will ever be my favourite way to communicate and I’m undecided how much I’ll use it, but it’s nice to try these things out.