I recently discovered One thousand paintings, a project with the aim of selling 1000 paintings of the numbers 1 to 1000. The pricing model is quite interesting:

Generally, the value of a number is defined by the number itself, in the following way: value = 1000 – number. However, this is only the maximum price. Initially, a discount of 90% applies. This discount will decrease by an absolute 10% for every hundred paintings that are sold (for example, after 300 sold paintings, the discount will be 60%)

I thought the whole thing was quite cool. Having showed it to my wife (who is herself an artist), we quickly started looking for numbers that were still available. Many of the likely choices had already gone (including my preference, 404) but she pointed out that 365 was still up for grabs (yes, yes.. we should have got 366 as well, for leap years). Before long, we’d ordered it, happy to support a cool project and wondering where we’d hang our unique 12″ x 12″ painting. 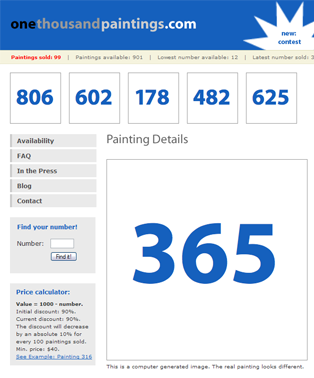 It doesn’t seem so long ago that the Million Dollar Homepage was taking off. Ian, while wondering whether gullibility was a pre-requisite for early adopter status, bought an ad for eightbar, which I notice still manages to bring us in over 30 clicks per month. While these are undeniably different projects, it’s hard not to compare them.

When Mrs Roo and I bought 365, it was the 98th painting sold (handily just within the maximum discount). Today, having been linked from boing boing and other prominent blogs, he’s already sold 144 225 and rising very fast. Surely mainstream media attention can’t be far behind.

9 thoughts on “One thousand paintings”