I’ve been a fan of Last.fm for a while, and a really big fan ever since I noticed that Matt Biddulph, while he still worked at the BBC, pulled a very nice hack to update his ‘sekrit’ user every time Radio 6 plays a song.

Anyone following Eightbar in the last few months can’t have failed to notice that we’re getting pretty interested in virtual worlds and the metaverse. Second Life is not the only virtual world out there, but it’s a popular one. Since it makes it fairly easy to build things, and now lets you make HTTP requests from within scripted objects, it’s a pretty handy environment for knocking up 3D artifacts which render web data in slightly more interesting ways than, say, the average RSS reader. 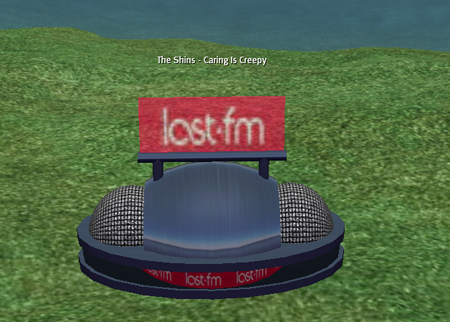 In between enjoying Second Life’s third birthday celebrations, I created this ugly beast. My Last.fm feed watcher (despite its similarity to a squashed fly – those are supposed to remind you of speakers rather then eyes) displays the title and artist of the last song I listened to. Eventually it might provide a more complete interface to show more information about my listening habits, but for now I’m happy to keep it simple.

6 thoughts on “My latest Second Life toy – a Last.fm player”