This years Innovation Jam was the third of IBMs jams. It was mainly web based, with over 150,000 people (IBMers as well as their families, business partners, universities, clients, …) apparently generating over 46,000 ideas.

Of course, as you’d expect, some of the fun happend inside Second Life too. This was a joint effort between IBM’s Virtual Universe Community and the NMC, with the Alliance Navy providing security and joining in the discussion too.

All the ideas generated went into a multi stage selection process, in which they were filtered and refined down, with $100 million in funding to make the top 10 ideas happen.

As was already reported by Reuters (as well as Business Week and, well, pretty much everywhere) this week…

Chairman and Chief Executive Sam Palmisano (right, with his Second Life avatar) is set to visit Second Life on Tuesday, Nov. 14 following a “town hall” meeting with some 7,000 employees in China

The 14th is finally upon us so I thought you’d be interested to hear what happened.

The event itself was a ‘townhall’ IBM meeting, held in an IBM location in China, in front of more than 6,000 employees. Sam Palmisano presented in person, but when he started talking about Virtual Worlds and the 3D Internet, he first handed over to Irving (who recently blogged about signing up to Second Life) whose avatar was surrounded by a decent sized bunch of IBMers from across the world. 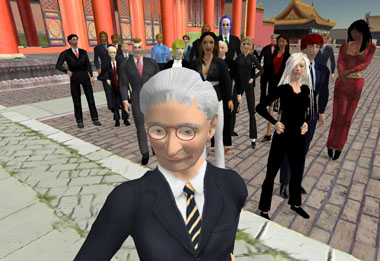 Later, Sam’s avatar (samatar?) entered as well, and, nimbly assisted by our own Rob Smart, delivered his message both to the IBM China employees gathered there in person as well as those of us in the Second Life portion of the event. Rob was also joined in Beijing by Holly Stewart and Ian Smith, whose tireless work recently resulted in their being invited to attend (read: be camerapersons and generally make it all work) in person. Huge respect to John Tolva for his tireless efforts in making this event happen too. John has written an excellent post on his blog about the logistical challenges of pulling something like this off.

I didn’t get any great screenshots of the Sam avatar (I hope to add some more later), but here’s a quick grab of Sam and Irving presenting together.

So what are the ‘winning’ Innovation Jam ideas Sam announced? They are…

You can read the list in full, complete with an explanation of each one, in a recent IBM press release.

As with so much of the recent Virtual Worlds related work, this was a lot of fun to be part of. It doesn’t look like much, but it is a bit of a milestone, and will no doubt increase the internal interest in Virtual Worlds still further.

Because of the timezone, the US employees attending virtually were up late (1:30 AM EST) and those of us in the UK were up early (6:30 AM GMT). While the rent-a-crowd were excitedly waiting in Second Life we were listening in to the event over a phone call and getting gossip from those embedded locally over IM. The atmosphere was tense, but also slightly hysterical due to the late night/early morning/what on earth are we doing nature of the event. Total madness of course, but what else would make us all want to get up at crazy times and dress up in suits?