As Andy pointed out, some of us spent much of today in both London and Second Life hosting a Virtual Worlds event for European press, which included a rather exciting global ThinkTank session. 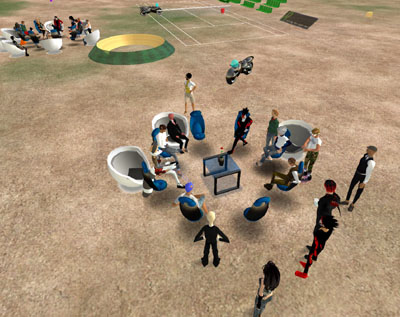 We tried to make the day as interactive as possible, and after introductions and a real life discussion in the morning we spent a chunk of the afternoon immersed together in Second Life. It was a good opportunity to run a ThinkTank, in which we invited a wide array of bloggers and thinkers (including Ren Reynolds, Jerry Paffendorf, Adam Pasick and many more) to discuss Virtual Worlds, open standards, and the 3D Internet. Not everyone could make it of course (sadly some suffered from some recent issues with SL) but I think we ended up with 33 attendees altogether, covering a wide array of subjects. I’ve uploaded put the transcripts of the two discussion groups, both Ian’s group and my own.

I am already looking forward to running another one of these before too long. Thanks to everyone who battled with troubled teleportation to make today happen.

In other, but related, news: IBM.com carries a big flashy link to a big flashy piece on Game Tomorrow, starring Jai from the GameTomorrow blog (who, I see, even has his own MySpace page). Pretty timely stuff.

9 thoughts on “IBM Virtual Worlds event in London and SL”