if you’re in the UK and get a chance to glance at pages 14 and 15 of the today’s Independent, you’ll see they have published an A-Z of Second Life.

A is for Avatar, B is for Building, and of course, I is for IBM…

“The computer giant is one of a growing group of businesses to cash in on SL, where virtual dollars can be exchanged for the real thing (see Dollars, Linden). Last month IBM built 12 new islands in SL, where clients and the public can visit special projects, including a partnership with the US electronic retailer Circuit City. Together they have opened a virtual shop where potential real-world customers can view products. The firms have also experimented with an interactive home theatre, where residents can recreate their living rooms and choose the best TV to fit. One island includes a social area for 900 IBM residents and company alumni to swap ideas.”

Of course, stats which change quickly are very difficult to keep accurate, and since they heard it was 900 (probably fairly recently) the number of IBMers in SL has already risen to over 1600. Still, nice IBM made it into the list (along with Linden Lab, Newsnight and Reuters. Grab a copy if it’s still at your local newsagent.

You may want to take note of some of the movers and shakers that Adam Reuters is interviewing in Second Life. The main page has the schedule and the bios make for an interesting collection.
As usual 3pointd has some good points and beat me to it, in that just the fact that the message about virtual worlds is being spread to influential people is all good.
Now my real life is likely to preclude my attendance as I cant see the midwifery department being quite so enthusiastic about Second Life.
I also am not sure I could resist asking the superb and inflential Sir Stelios Haji-Ioannou if he is after an EasyLife, which would probably get me removed from the sim. Yes I know he is bound to get that almost as many time as I got sent the first life page but he may actually be thinking about it once he has met Adam as he has a sharp business mind.

Over on 3pointd Mark Wallace has a piece on the news relating to a BBC childrens version of a Metaverse/Second Life.
Personally this is great news as with a toddler who already thinks her websites are not good as “daddy’s work”. She occassionally sees a screen and says “daddy is that man you” alsowith another one on the way any moment now it is nice to think I will be able to share my kids exploration of all things metaverse and say “I remember when all this was fields”. As well as atleast in part understanding the whole point of this, but hopefully without putting them off the whole thing.
The BBC have a very forward thinking view on many things and a noticeably high quality output of childrens entertainment and education.
I wonder if I can finally get a blue peter badge as a metaverse evangelist?

Some of you may have already visited the Lotusphere build or read about it over at the Second Life Insider
IBM 9 is the place to be to see the Lotusphere pavillion
I was over taking some shots this morning for this post and have already met some very interesting people. Which is after all one of the main benefits of a metaverse. Visiting places and events and experiencing the presence of others there with you.
So here are some snapzilla shots of the build. I am sure the Sim will get very full, but please keep trying and see who you can meet and greet.
There are the rest of the 12 islands attached to have spin off meetings too. Just look at the main map and search for IBM as a region name.

****Update
The SL elements are shown in the video key note

Lots of green dots too

I know I am slightly biased, but this is a very good article in Fortune that covers a great deal of why we all think metaverses like Second Life are so important in all sorts of ways.
For many people this will help answer some of the questions. It is certainly the reference article I will point many people to when I can’t give a personal explanation.
Of course there are more questions to discover the answer too and thats the journey we are all on.

The article with Raph from Areae talking to Aleks Krotoski at Guardian Unlimited which I saw referenced over on 3pointd makes for interesting reading. Though we do not know what Areae will actually turn out as we know that its creators have quite a track record in MMO’s.
Mark Wallace at 3pointd highlights the need for these various metaverses, as they appear, to be able to network with one another in the same way we have seen the rise of the web 2.0 api for people to mash into their own creations. The interconnected nature of the web can no longer sustain overly insular applications. The attraction into Second Life was pretty much cemented by the ability to get data in an out of the environment which then got a lot better with the implementation of http in LSL
This is certainly of interest to us eightbar members here in Hursley which is the home of messaging. Also with Service Orientated Architecture (SOA) being a key design decision implemented throughout many new systems there is not reason to not apply this pattern to metaverses and creations within them.
Even many of our buildings are using the SOA hub template that is populated with much more information on SOA over on our IBM islands in SL.

The official guide to Second Life was something that I initially thought might turn out to be a reprint of the help. It is however much more than that.
I ended up buying it becuase I wanted to a) Have it as a historical piece of memoriabilia and b) becuase of the people who were contributing to it, Mark Wallace of 3pointd , Wagner James Au of New World Notes and Cory from Linden to name but a few.
It is fascinating looking through a book seeing the people you have been talking with, or whose work you have experienced in print.
It was a pity not to see eightbar or any IBM references in there, but maybe that is for the reprint 🙂
It is good that this exists and great that it explains some of the history, ethos and community nature of Second Life. It will help some of the people come to understand SL through reading and then experiencing a metaverse.

I have spent quite a large amount of time with people explaining why Second Life really is not a game. However I do usually point out you can do game like things in it.
So along comes Smokin’ Aces at virtual NBC by the electric sheep.
***Update There is some video over on out to pasture
Now imagine you wanted to immerse people in the story of a film. What normally happens is lots of money is spent buying a licence of a game for a game developer. Then elements of the movie are pulled into a game, with historically mixed results.
Smokin’ Aces is about hired assasins tracking down a target. Now, they team have created a nice rendition of that concept. Players look like they wear a HUD and are given targets. The targets are the other players with HUD’s whilst they are wearing them.
They then have to be tracked down across the entire grid.
The bounty is l$, a.k.a. real money.
Nice ideas such as “Players will have the ability to arm/disarm their HUD at any time to allow their normal (Second) lives to carry on. However, to avoid deception and encourage gameplay, each time a player disarms their HUD, a 10% reduction will be taken from their bounty.” from the instruction site bring some new ideas to gameplay and SL existence.
Maybe its time for an alt to avoid being targetted too much as a member of eightbar 🙂
The game runs from 12th January to 26th January.

If you’ve been reading eightbar for a while, you may know that last year, some of the group put together a nice demo for Wimbledon (video available). The build was a proof-of-concept for taking a live feed of the balls from the Hawkeye system, and replaying the action in-world.

Well, the news is out on the Sydney Morning Herald site today, and Chris Yeoh mentions it too… a group from IBM has put together a really stunning build for the Australian Open. From the SMH article:

Over the duration of the two week tournament, data will be fed from games in the real Rod Laver Arena into the unreal one, nano seconds after happens.

The feed will come from game-tracking technologies such as the line-calling system HawkEye, PointTracker which plots shots and ball trajectories and Speed Serve which clocks the players’ serves.

I took a sneaky early tour of the site. There are some fantastic touches – for example, you can see rallies played out on the court, there are plenty of shops, open areas to chat, and video screens. Well done to the team involved (Pipe Hesse, Gizzy Electricteeth, and all the others) – this is really one of the best builds I’ve seen.

Click through for slightly larger screenshots, and be sure to visit once the site is open to all 🙂 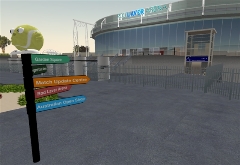 Well its just a few minutes, but we have IBM, Hursley and IQ on the television with Paul Mason of newsnight.
Its available to watch here first it the article marked virtual death
****Update You can also read it here and part 2 here
The piece is aiming at delving deeper into who we are online.
There are actually more frames of my 3d print than of me, but thats not a bad thing.
So we get the real Hursley build and Yossarians virtual one on the telebox.
So from about 7mins 20 to 9mins 15 you get to see some other IBM virtual stars and lots of shots of the real fabjectory printed version of the virtual me.